The Class of '70 is turning 70 this year! Let’s get together at last and celebrate our very special birthdays. Saturday, October 1, 2022 at the Benicia Yacht Club. Dinner and conversation. Hugs. And perhaps a raised glass or two. More details to come, but save the date now. For more information, contact Catherine Hanson at c1hanson@comcast.net or 916-397-3042 or John Isaacson at isaacsonj52@gmail.com or 707-999-6647.

SV Class of 1955 had their 67th class reunion at Bob & Carolyn Lambert’s home in Napa on August 7th, 2021. Only 9 classmates were able to attend; Norm Tavalero, Bill Blake, Maureen Moore (Sheehan) and her husband Bill, Toni Pires and his wife Joyce, Barbara Turcios (Brown), Joe Kroner, Jean Coan and Therese Ware (Gnotta). They all had a great time. Bob & Carolyn made a delicious lunch, Bob did all the cooking. They went to a great deal of time to have everything perfect. Everyone looked well and happy. 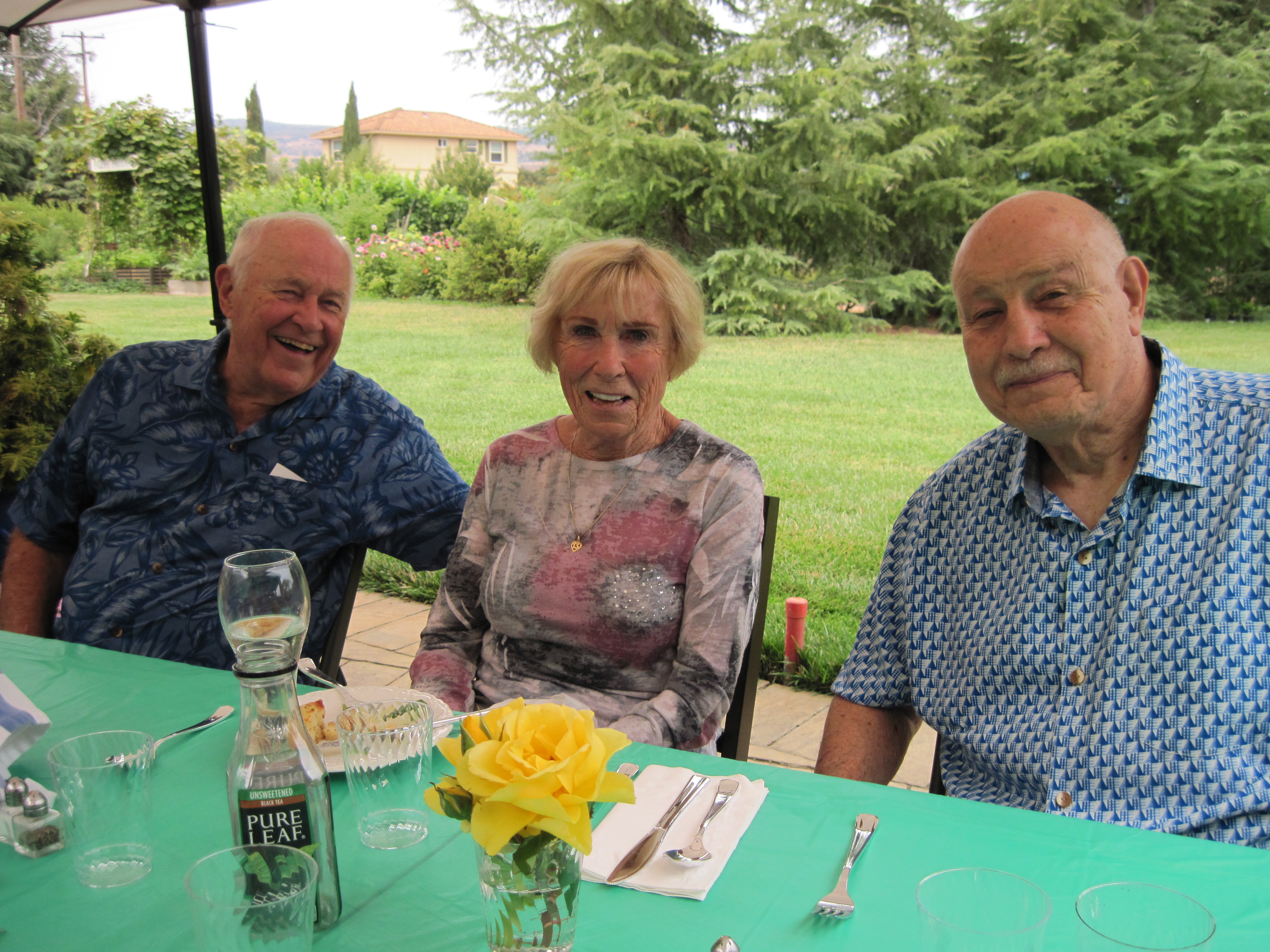 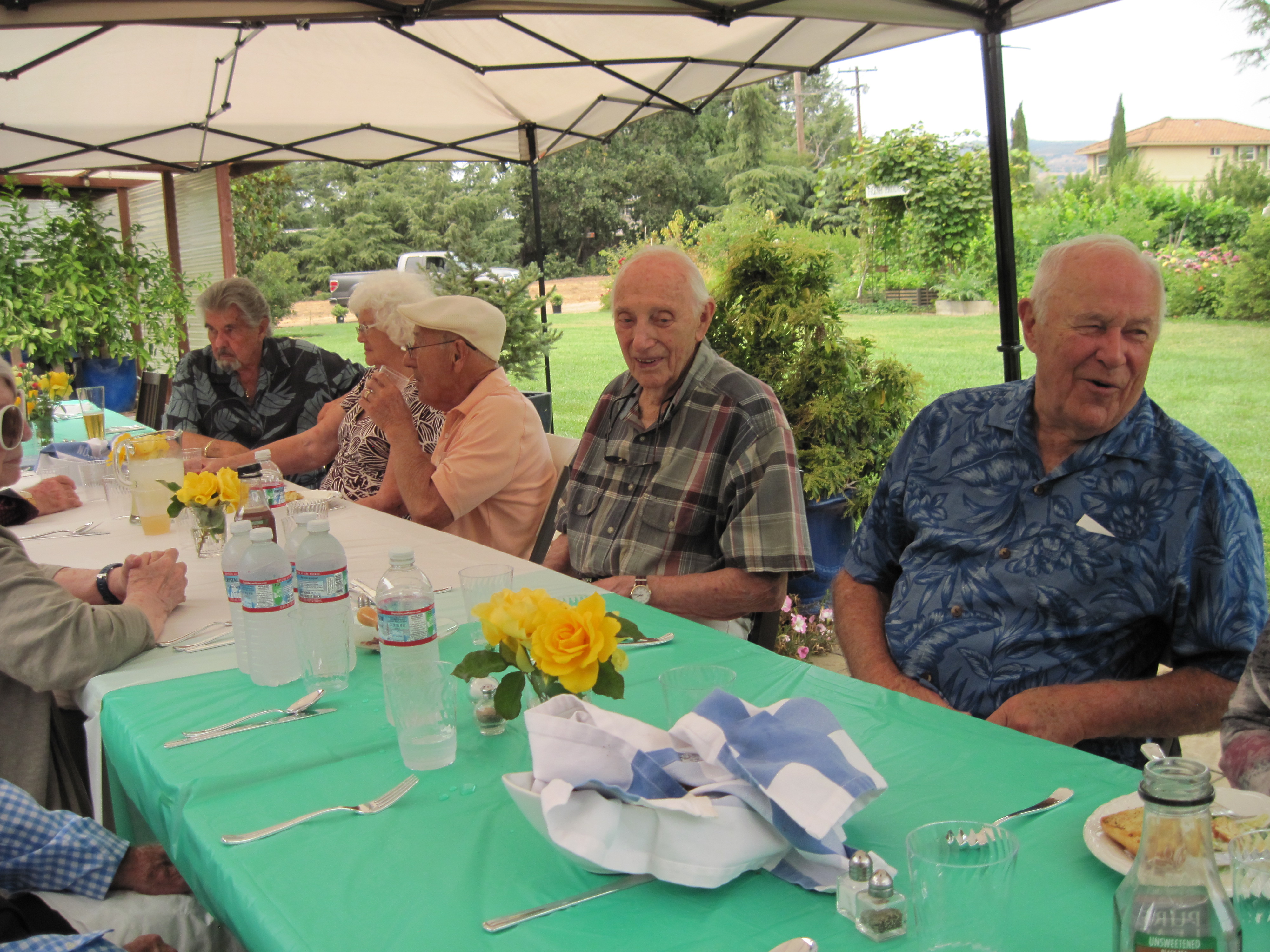 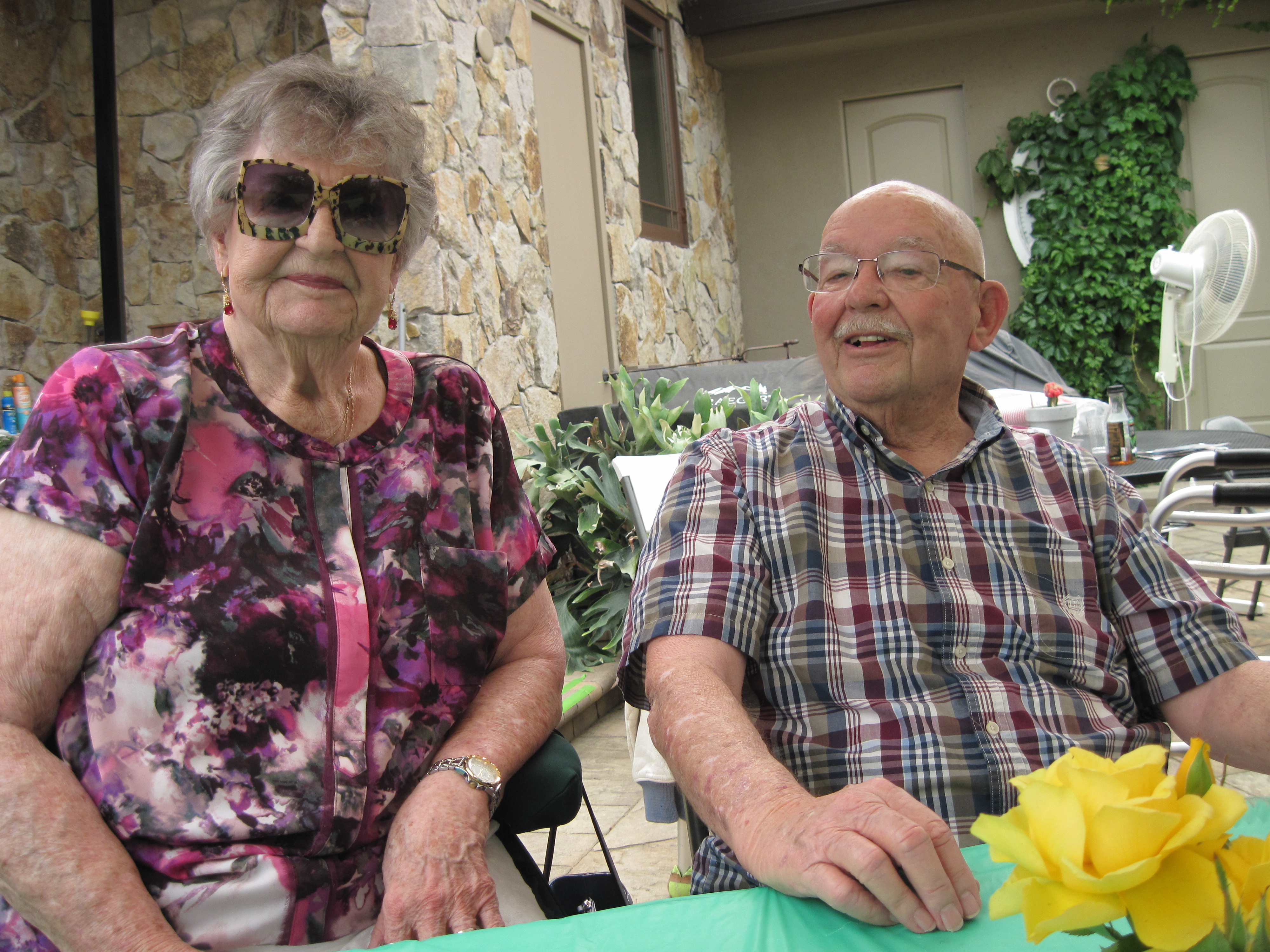 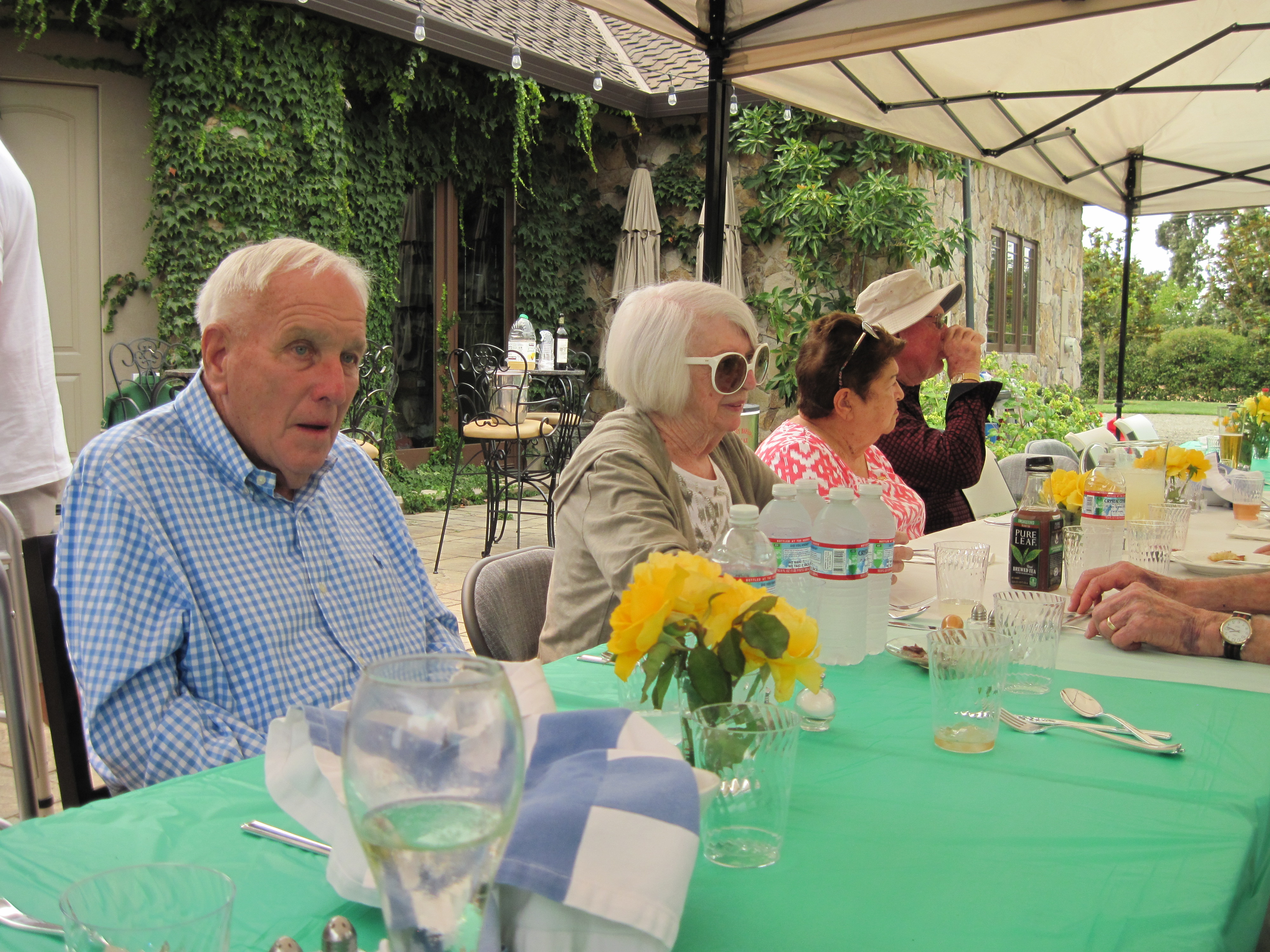 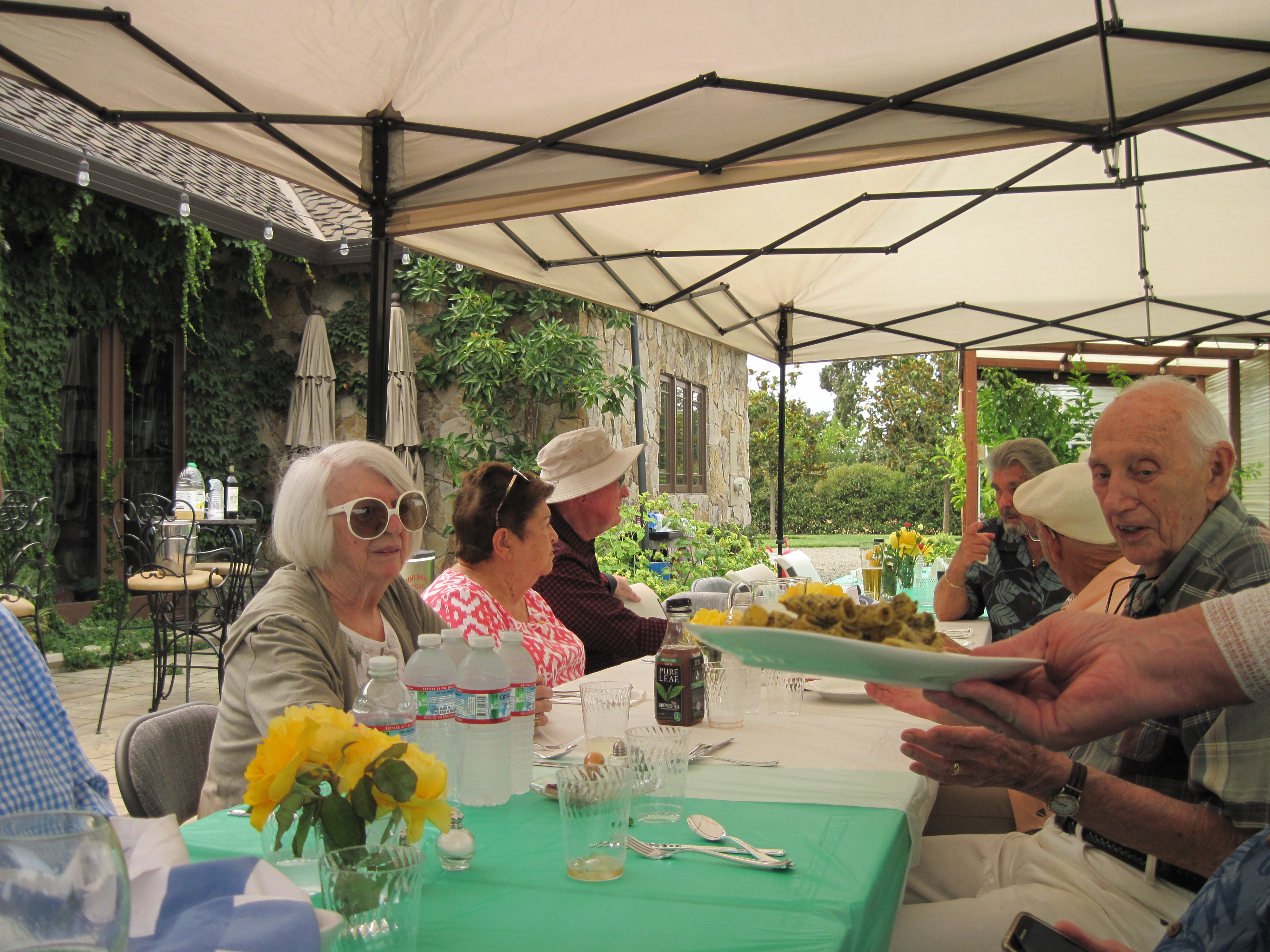 It was a premium luncheon lasting longer than anyone had anticipated. So many memories to share and so little time. There were 42 in attendance with the persons coming the furthest from Boise Idaho and Lower Baja California. Each guest was given a name badge with there senior picture attached. A poster board honoring those no longer with us also contained their senior picture. A wonderful time was had by all and the organization of the luncheon was greatly appreciated. 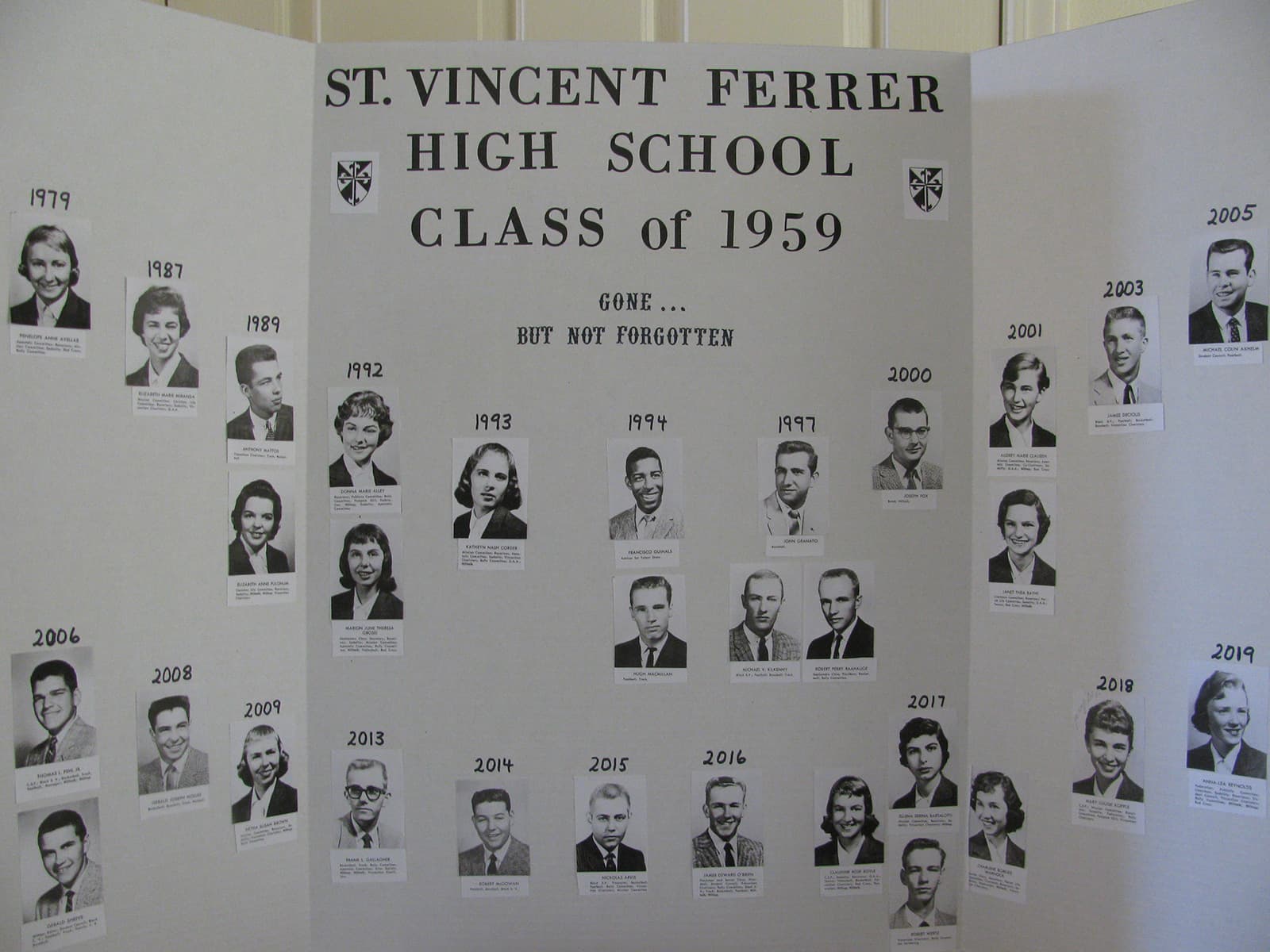 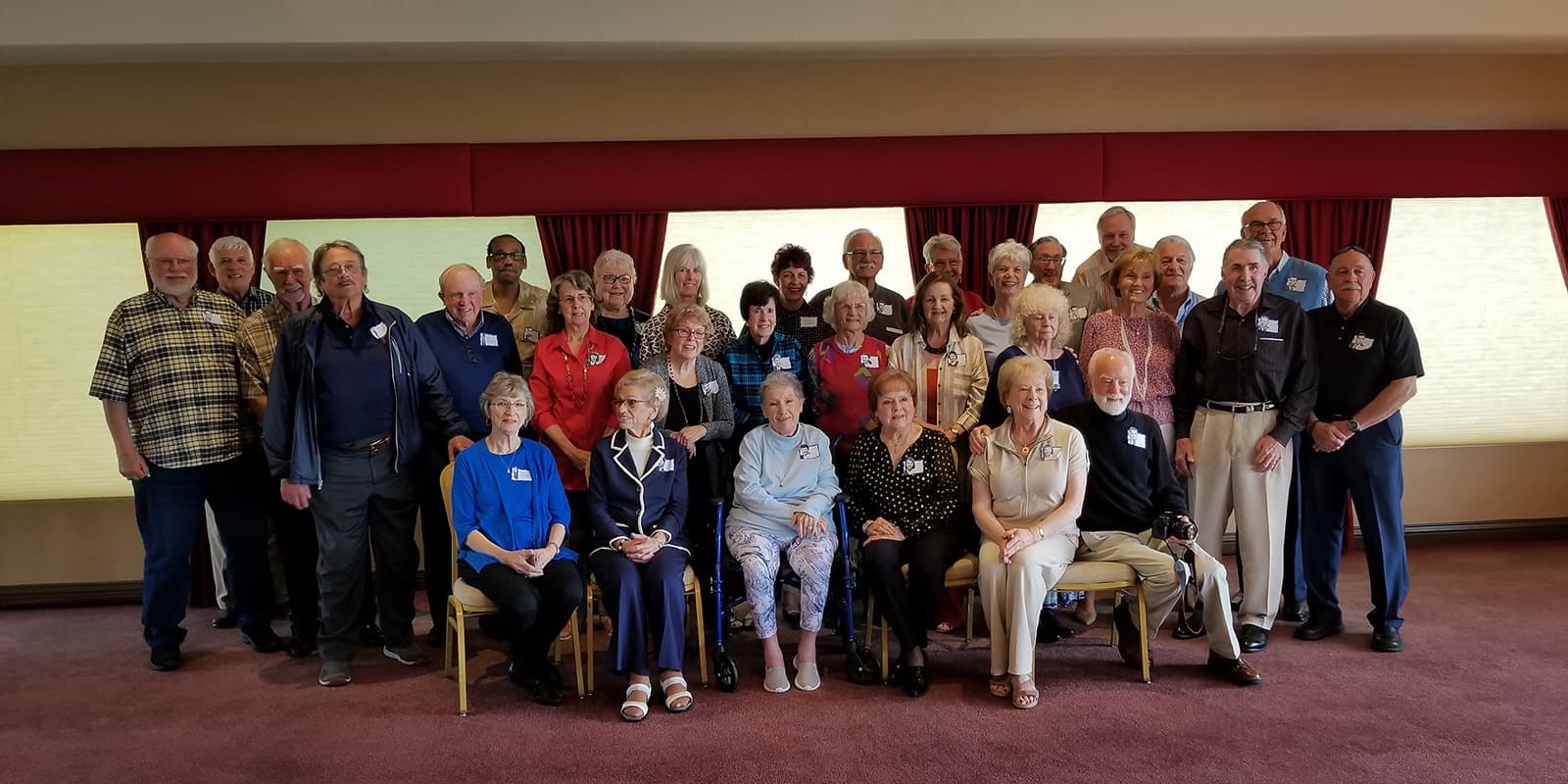 SV Class of 1960 had a reunion on October 20th, 2018 at Zio Fraedo’s in Vallejo. There were 46 classmates and spouses that enjoyed an afternoon of socializing, remembering and catching up . The group enjoyed a wonderful buffet, some good conversation and lots of laughter. Chet Curtis began the festivities by welcoming the group and Class VP Gail Anderson Herkenrath remembered all classmates who are not with them anymore. Many ideas were discussed on how to celebrate their 60th reunion in 2020 and those plans were noted and classmates will start planning in the next six months so they can get a date out early for planning purposes.

If you are reading this and were not contacted for this last gathering it is because we need an updated address and email. Please send your current contact information to Claire La Belle Luke at vern.claire@eyesonthefuture.com so we can get you on our mailing list. We had a number of classmates who were not able to attend in October because of previous commitments but they did express an interest in gathering in two years for the 60th reunion.

Special thanks to the Alumni Office at SPSV for the help in finding some people and in the various ideas they shared with us.

SV Class of 1960 celebrated its 60th reunion on Saturday, October 16th 2021 at Zio Fraedo’s Restaurant and was enjoyed by 40 attendees. The originally scheduled reunion was postponed due to the impact of the pandemic. The reunion consisted of a lively Social Hour, fantastic buffet and ample time to visit and reminisce about our time on the Hilltop. Mike McCurry delivered an outstanding Invocation / prayer to open the event. The highlight of the reunion was being with our classmates from the Hilltop. Our class included students from St. Vincent’s, St. Basils and St. Johns in Napa grammar schools as well as from other surrounding areas. Several classmates have known one another for 73 years. Our class was never known for being shy which was evident throughout the reunion. A great time was had by all. One topic of discussion throughout the reunion was how much we cherished our years at St. Vincent’s and The Dominican’s who had a major impact on our lives. Mike McCurry won the prize for having traveled the furthest distance. Mike and his wife Sandra drove from their home in East Texas to Vallejo. Carolyn (Hoffman) Maher and Molly (O’Neal) Eaton each won the prize for most Grand Children with 13 apiece. Claire (LaBelle) Luke headed the planning committee. Other committee members were Chet Curtis, Jim Maher, Vern Luke and Charlotte Curtis. Thanks to SPSV Development team for supporting our reunion. 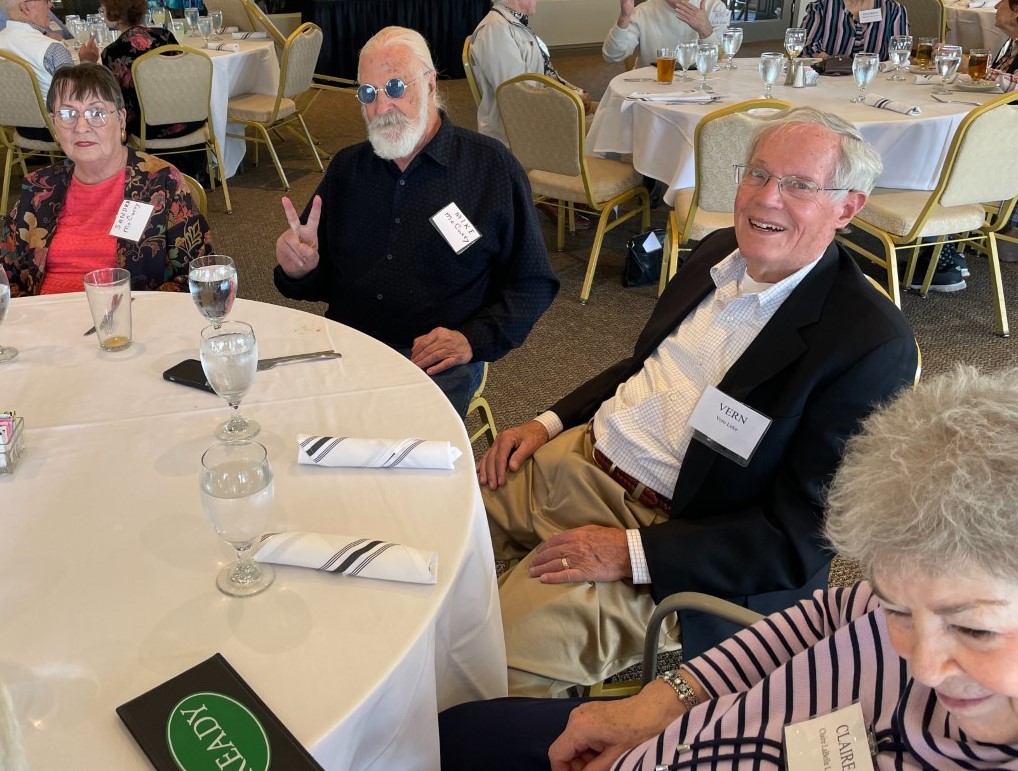 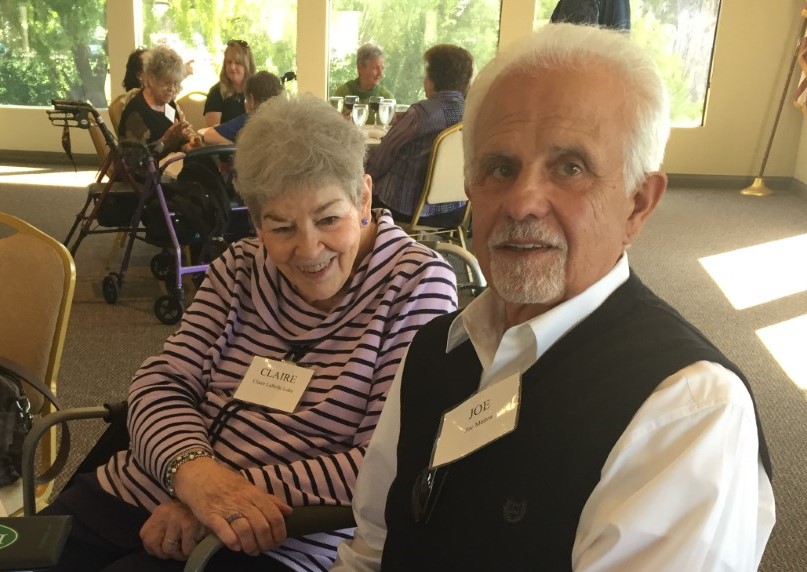 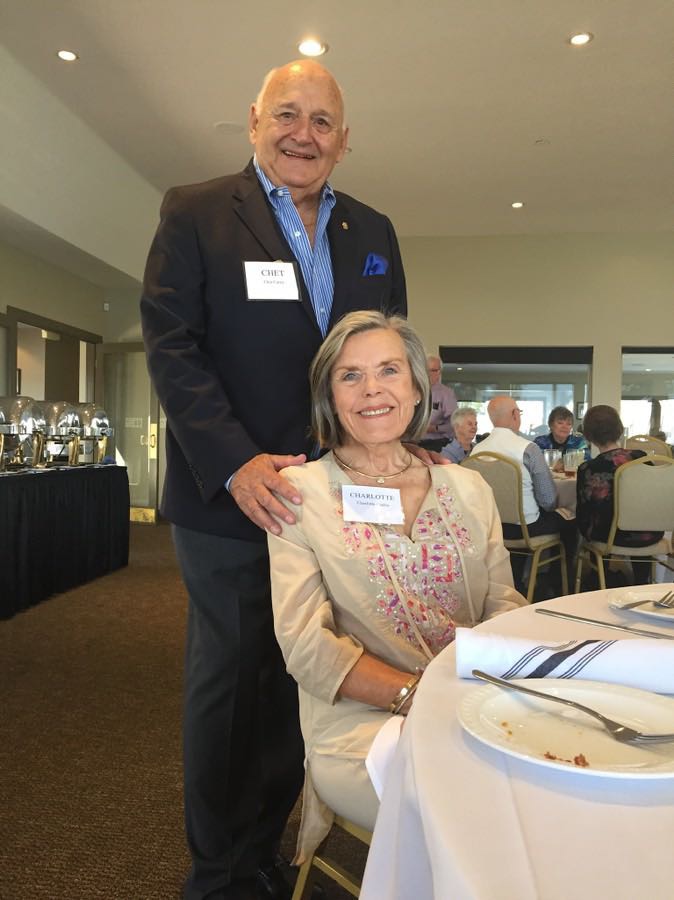 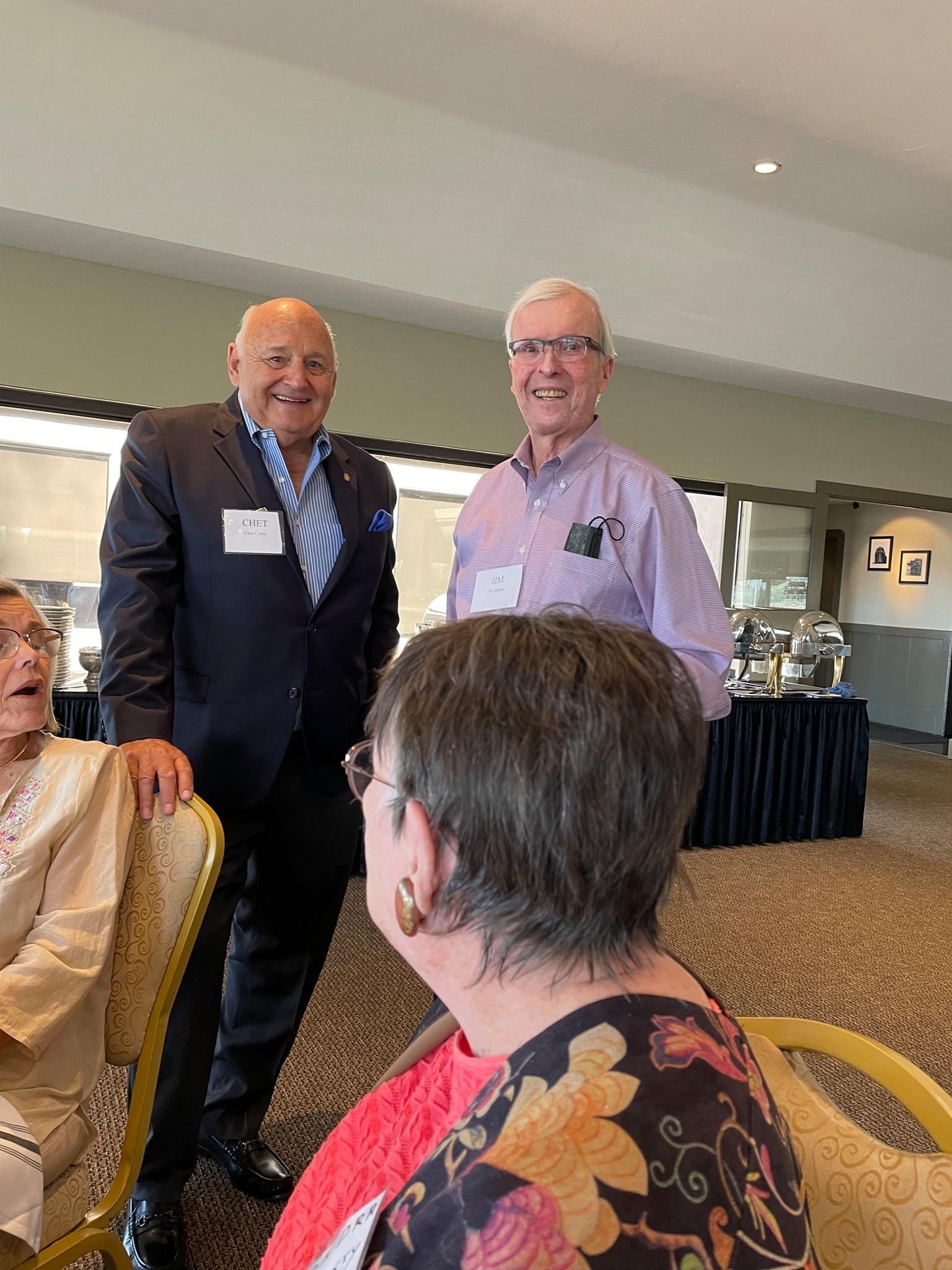 SV Class of ‘68 held an afternoon gathering of “Saints Hilltoppers” on August 28, 2021 at City Lights Café in Vallejo. Hosted by some party-starved members of the Class of ’68 (who wish to remain anonymous), the unofficial “reunion” welcomed alumni and their guests as well as anyone who ever attended the high school (particularly so as not to exclude those boys from the Classes of ’70 and ’71 who started out there but were moved across town for the ’68-’69 school year to become the first classes at the newly-built St. Patrick’s.) The venue provided both indoor and outdoor (tented) seating and nostalgia a-plenty with hot dogs smothered in a re-creation of Mary’s special sauce, oldies in the background, and old newspaper clippings, Hilltalks, and football programs filling bulletin boards and under all the glass table tops. Many classes were represented, going as far back as ’55, and a good time was had by all who braved the day’s perfect storm of record heat, smoke-filled air, and pandemic fears. The hosts relied on “email trees” and word of mouth, so if you did not hear about the gathering until now, know that they plan to do it again next year, explaining, “We’ll never run out of memories to share, stories to recap, or partying to catch up on! 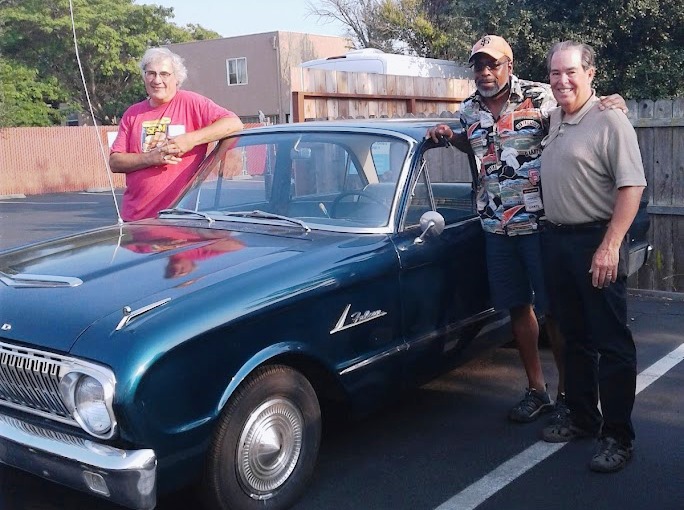 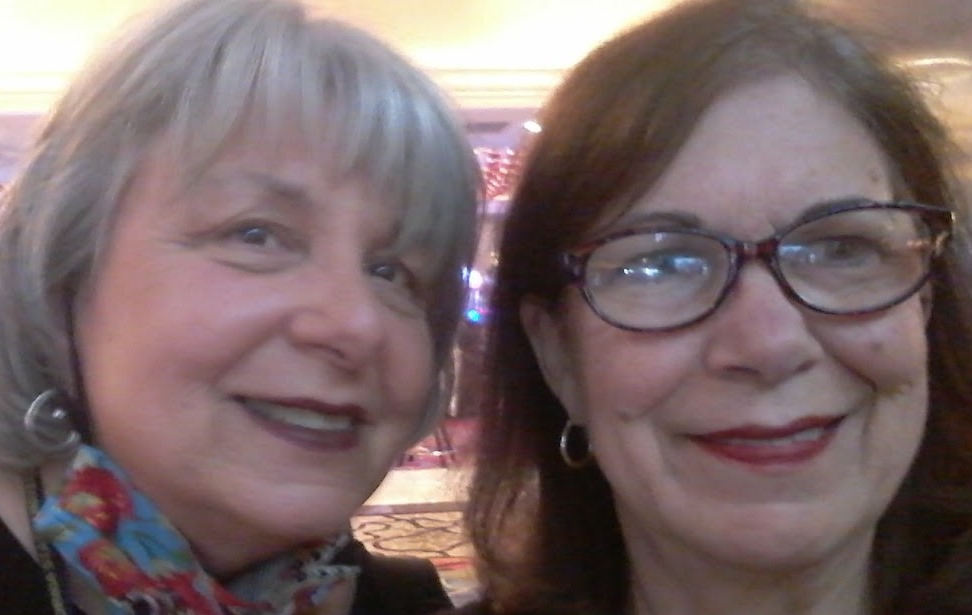 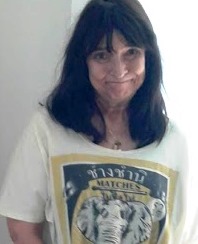 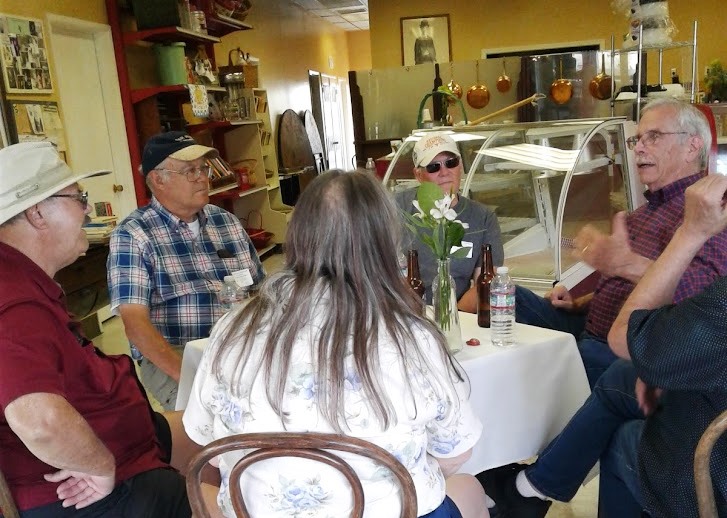 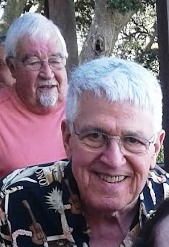 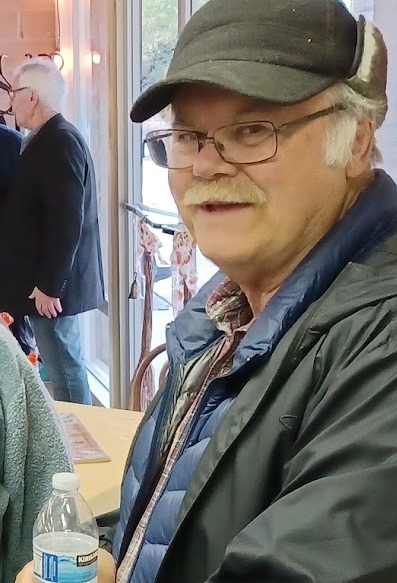 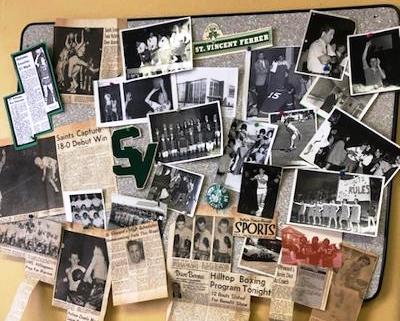 The SV Class of 1969 celebrated their 50th reunion on August 9th & 10th, 2019. The warm-up for the weekend was a casual meet & greet at Vino Godfather Winery Mansion on Mare Island, and culminated the following evening with over fifty members of the class and their guests attending the reunion, which was held at the Benicia Yacht Club. Patrick Mahoney ‘69 emceed the event and also doubled as 'DJ Pat' while the class and their guests enjoyed the cool breezes coming off the Carquinez straits while dancing to his musical playlist of oldies from 1969. 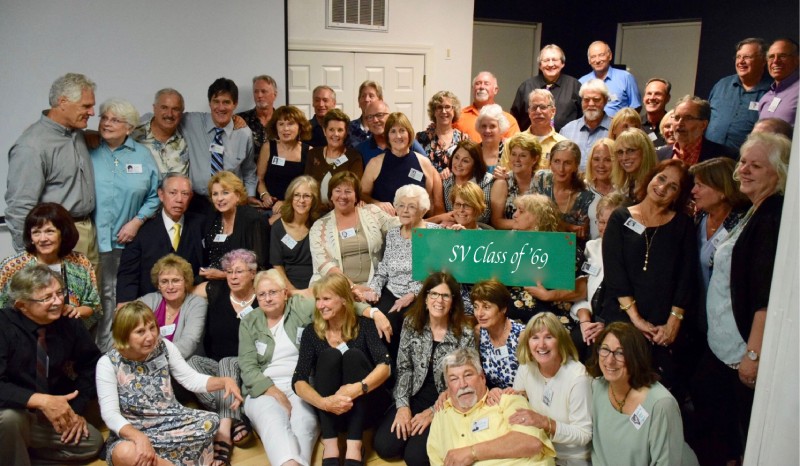 The SV & SP Classes of 1979 along with friends from the classes of ‘80 and ‘81 celebrated their 40 year reunion in style at the Vintner's Golf Course in Yountville on September 28, 2019. Classmates came from as far away as Boston and Texas to enjoy the fun and many classmates brought their spouses who joined in on the fun. Old stories about silly things they did as teenagers was the common theme of conversations. They are looking forward to many more reunions! 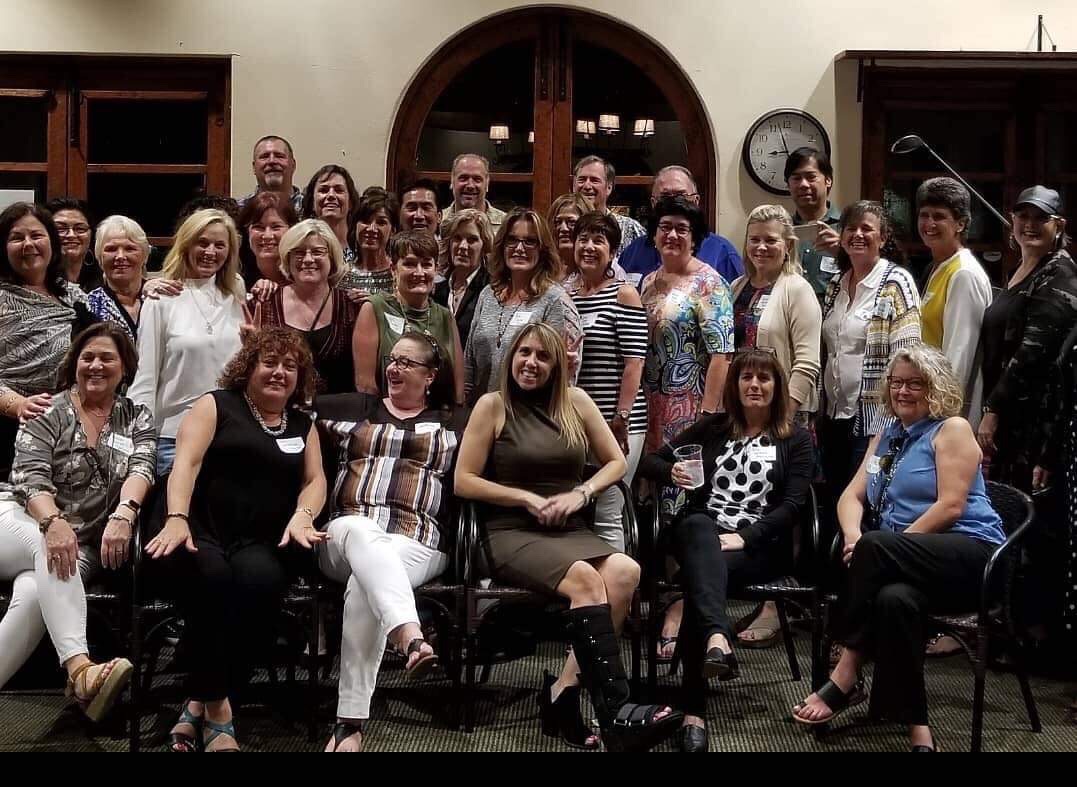 SPSV Class of 1989 celebrated their 30 year reunion over the weekend of November 8-9, 2019. They started with a mixer on Friday night at Mandarin Restaurant and Lounge with owner Pei Wen Wang ’90 and finished Saturday night at the Runway in Napa. It’s tough trying to get their class together, but when they do, they know how to party and a great time was had by all those who attended. Until next time Class of 89!!! 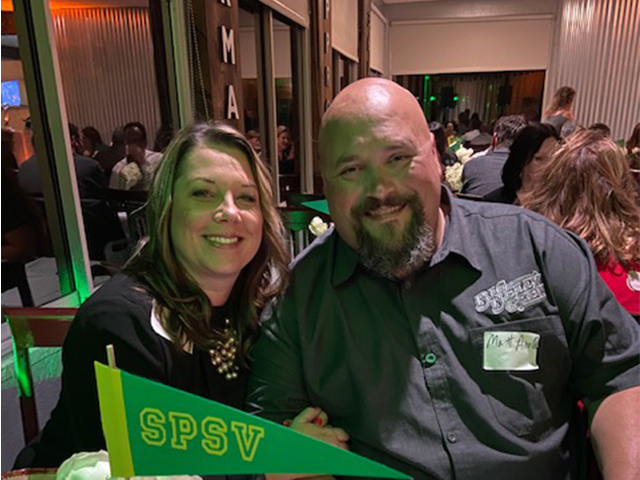 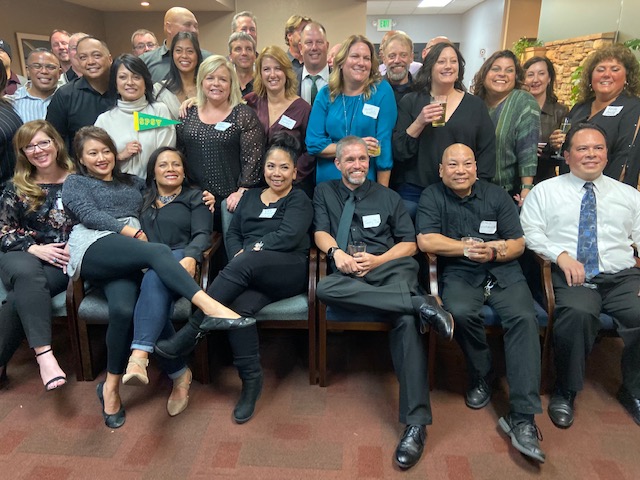 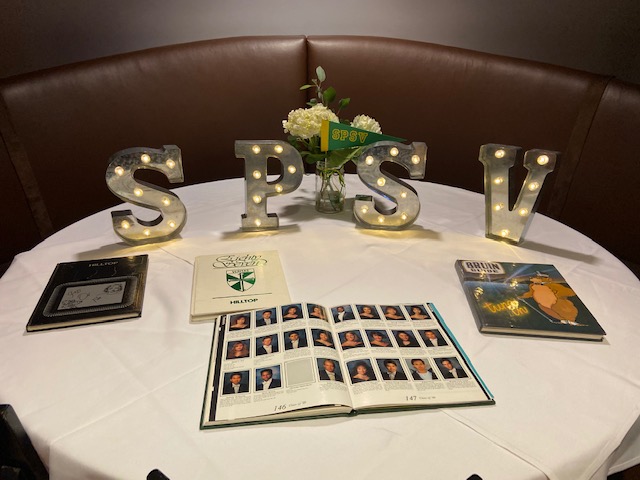